This is the first part of the music theory in F# series:

There are 12 notes in occidental music theory, 7 natural and 5 altered:

Each notes are separated by a semitone. If you look at a piano board, the white keys are the natural notes and the black keys the altered: 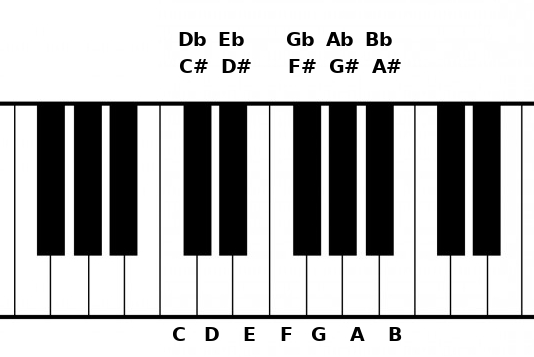 A# and Bb are enharmonic, it means that they produce the same sound.

If you add 12 semitones to a note, upwards or downwards, the note will be the same from the start but with a higher or lower pitch. They are called octaves.

Like I said before, some notes produce the same sound, so for the sake of simplicity, I will represent only sharp notes and not flat ones for now.

The type Note is a union type which mean

The Note module lists all the functions and values related to the concept of Note. all is the list of all possible Note.

Now, I want to choose a random note:

randomNote is the note at a random index between 0 and 11 in the Note.all list. FSI shows the random note, but a fancier representation will be better:

match ... with is a pattern match, it’s like a (very) powerful switch. So name works like this:

Another big F# feature is that the compiler infers a lot of things for you. It can infers that name is a function that takes a Note as argument and returns a string because the pattern matching matches Note values and returns string. So no need to be explicit about the types in general, the code will be more concise with this strong typing. But if you prefer to be explicit, you can rewrite this function as follows:

Then the printfn function write in the console:

You can also use the |> operator to simplify the code:

This operator is like the | operator in Unix, it takes the value on its left and passes it as the last argument of the function on its right:

It is a powerful operator which is used a lot in F#.

That’s all for this step. You can check out the full code here.

Next step: The Major scale